Too Loud a Solitude by Bohumil Hrabal
My rating: 5 of 5 stars

Overriding all the comprehensible and perplexing spaces enjoining the various uneven points of existence in the larger lattice of congruent existence, I have pushed the ship of my life with the ardour of a sincere helmsman, trained to always prioritize steering over stalling. But did someone tell me that the sea is more legendary for the turbulence it unleashes than the serenity it gifts? Perhaps that should have helped me. And Haňťa. Or maybe not.

“For thirty-five years now I’ve been in wastepaper, and it’s my love story.”

Haňťa is not a man you would meet on the road; you would meet him underneath it! As you heard him, our dear Haňťa has been recycling papers in his hydraulic press in a basement cellar for thirty-five years now. A failed affair, a dismantled family, no friends and a shrewd boss; you would think he was a weightless mass.

But Haňťa treasured his existence. And his love-story was one I could step up and embrace as my own. He was no ordinary, ragged-shirt-cobbled-shoes-torn-hat-haggard in a reclusive, submerged workplace. He was a connoisseur; connoisseur of books! Precious and banned books, in their elegant covers, finely crafted edges and embellished spines; oh, they sent him into a dizzy, especially the words wafting from the wombs of papyruses christened by flagbearers of philosophy that he would expertly secure just before feeding them to the gurgling press. In the words of Aristotle and Sophocles, Kant and Goethe, Camus and Sartre, he dissolved his solitude to see it crystallize into priceless turquoise of redefining beauty and wisdom, galloping on whose back, he conquered thirty-five years of cold shoulders and defiling glances. Recreating a literary world within his lackadaisical real world was a symptomatic victory, a roaring flush of medals of sorts that left Haňťa insulated to the economic upheavals and social abandonments.

But if forgiving was the name in distribution, the world would come last for anointment. Staying true to its dubious reputation, the outside world belched its ugly phlegm and the putrid liquid eventually quarantined Haňťa; well, almost. [A new factory, running new-age, automatic and faster wastepaper recycler machines gets erected, around the corner, in the shortest time, sending Haňťa out of work almost overnight. (hide spoiler)]

I am certain that Haňťa was a literary doppelgänger of Hrabal. When Hrabal finished penning this work in 1976, the politically charged environment of the erstwhile Czechoslovakia forbade him from publishing it. He went ahead nonetheless and self-published it, almost as a testament to his indomitable spirit and an ode to his feisty existence. But the next thirteen years were a tedious, exhaustive journey of moving from a suppressed voice of searing potential to an emulated voice of inspiring intellect, almost an agonizing punishment for a wise but recalcitrant writer. I suspect he lived those intermediate years, drawing strength from the books he read and the imaginations he permitted; sprinkling his reading sessions with humor and surrealism and erecting insurmountable walls of perennial refuge. There must have been excruciating periods of muffled freedom when his immediate circular cellar would have deserted him and the restorative heartbeat of his philosophical utopia may not have been audible either.  But he continued tending to his cognitive saplings, across seasons, in all those years. And I am glad the purifying aroma of the flowers from this patient gardener’s garden finally reached us; resurrecting an existence that was truly wholesome because it respected the many fractures within. 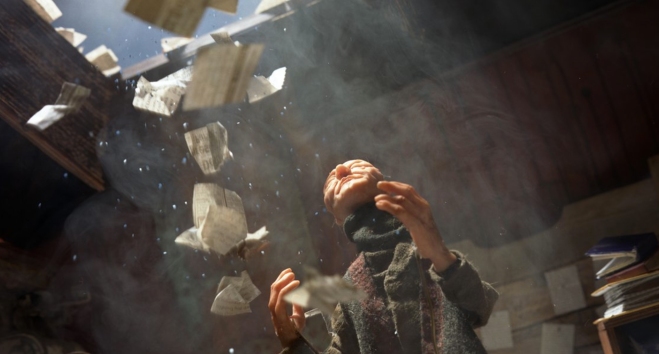