Norse Mythology by Neil Gaiman
My Rating: 4 of 5 Stars

Of all the fiction in this world, I find the ones rooted in mythology the most enticing; not because there is an element of otherworldly magic in them but because somewhere deep down, a bewitching veil of truth hovers above them. The characters we read of, the prowess we fall to, the betrayals we appal at and the spells we dive in, have all a debatable root which almost like our very own samudra manthan of the Hindu mythology, can be twisted this way or that. As most myths are made lesser of primary evidence and more of a secondary interpretation, there is a hidden little room of sorts from where you can see as far as you can, like Heimdall in this book. He is a kind of parallel to Mahabharata’s Sanjaya.

Neil Gaiman takes the essence of Norse mythology and spins a riveting web around it. Although he makes it clear in the beginning that this book will focus on the three towering characters of Odin, the all-father of gods, Thor, Odin’s powerful son and Loki, Odin’s shrewd, evil blood-brother (and eventual enemy), the chapters easily transcend the trio and throw open an enchanted window to the Germanic myths. Chronicling the journey right from the beginning when nothing existed and going all the way to Ragnarok, the apocalyptic war that wiped the gods and the giants, Gaiman deploys an easy and engaging language to retell the myths that remain fraught with magic, power, bonds, guilt, murder, betrayal, repentance, revenge and redemption. I chuckled at the story where Thor and his two companions are put to a series of illusory tests by a giant who didn’t want his kingdom to be usurped by the mighty Thor. I felt sombre at the unfortunate fate that was handed over to the Hel, Fenrir and Jörmungandr, the children of Loki from a giantess, just because they didn’t resemble the gods. I read with palpable excitement the battle of skills when the two most accomplished dwarfs, the craftsmen of the Norse world, were pitted against each other to create the most unique gifts for the gods. Mjölnir, the heroic hammer of Thor, was an outcome of this competition. 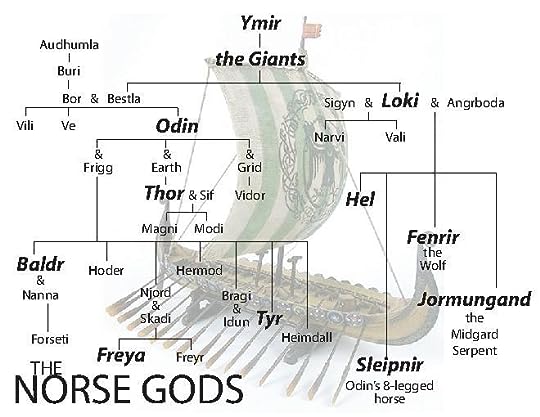 For most parts, the chapters were taut and action-oriented. Crisp and to the point, the narrative had a very clear agenda of telling the myths the way they were documented to be told. However, for the keen eyes who look out for detailed landscape and an aura of environment that inevitably leave a mark on the characters and their becoming with the passage of time, there may be something amiss. Questions of morality and immorality, mortality and immortality, lay suspended without direction. Now, perhaps, the objective of this book was to stuff in as many incidents as possible into the terse 300 pages, effectively closing the alternative of detailed painting and reflecting. However, Gaiman’s version remains faithful to the original and one may ditch the expansive road in the favour of a vertiginous fall.

Read all my reviews here.