Invisible Cities by Italo Calvino
My Rating: 5 of 5 Stars 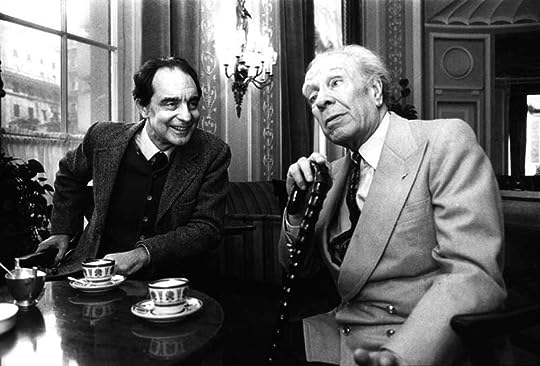 You landed in my world on a calm, dewy evening
And struck was I with a song I was about to sing;
A song that lay hidden in the silhouettes of each letter
That protruded from the cover, all poised to embitter.

But waited I, patiently, under the light of the mundane day;
You see, Mr. Calvino, I had a knack of seeing your way.
Fusing the curious with the depth, and peppering them with some humor too;
All too often, you had served, a world that was both fictional and true.

So, on a fine evening, when all your cities rose, at once, to a noisy chatter,
I exited my world and entered yours, as it was now, an urgent matter.

Welcome!, said Kublai Khan, The Imperious Chinese Emperor,
Even as he kept his gaze fixed at one particular Conjurer.
This particular Conjurer bore remote resemblance to the mighty Apollo;
Ah! He had his name! ‘Step in.’, said the Venetian, Marco Polo.

And so, with his highness Khan, I embarked on a tour of his empire,
Ably recounted for us, through the dazzling eyes of his humble sire.

While Isidora dyed me old even as my dreams kept fluttering in their youthful room,
Anastasia set my desires and memories in a vicious cycle, not knowing who fuels whom;
Zora pumped heavy sighs from the womb of forgotten cities,
As Mauralia lulled me into a nostalgic film of small felicities.

Said Marco Polo, all cities are same – same in desire and dementia, promise and insipidity, joy and remorse,
“You take delight not in a city’s seven or seventy wonders, but in the answer it gives to a question of yours.”

I paused to ponder, questioning him aloud about the revelations he just made,
But he continued to lead me into more cities, bustling with myths, death and trade.
He played with my biases at Baucis where people resided on clouds instead,
He suspended my belief in Octavia where the entire city stood running on a net!
Hopping Hypatia, Armilla, Beershaba and Leonia, when I stepped into Thekla,
Marco Polo held back my hand, ‘Watch out, work is still on this messy land.’
”Why the construction is still on? I asked a peddler scurrying by,
“So that its destruction cannot begin.” was his curt reply.
Walking gingerly in an air of puzzle, I witnessed Olinda and Procopia in a mild jostle,
One seemed to hold many cities in her womb and the other kept multiplying its people.

I stood there, letting the horses of my thoughts, to run amok these many cities,
To gauge what lied beneath this expedition, this mind-boggling imaginative treatise.
I opened my mouth to ask but Mr. Calvino, you appeared from nowhere,
‘The tour is over!’ is all you said, not paying heed to my nasty stare.

Here I am now, jumbling my geography and history, and a bit of memory as well
And filling mighty gaps that can serve as a decent rejoinder, I have this to tell –
Essential is not the fact whether these cities can be discovered on a map;
The essence lies, instead, in hunting for a common stamp.
A common stamp that shall impart an identity free of colour and creed,
Irrespective of our place of birth, shall bind us with the same deed.
Deed bellowing swirls of compassion, industry and honesty sans any chagrin
And a city of such deeds doesn’t lie outside but reigns unequivocally within.

Trust Mr. Calvino to show you, how subliminal accounting of life appears,
Follow Mr. Calvino to receive in your lap, sparkling wishes to last years.
Beware of his trap though! Don’t fall for his genius all too much,
Oh but this is futile warning, for there is no way to escape his touch.

The tour snippet is here! [“The inferno of the living is not something that will be; if there is one, it what is already here, the inferno where we live every day, that we form by being together. There are two ways to escape suffering it. The first is easy for many; accept the inferno and be such a part of it that you can no longer see it. The second is risky and demands constant vigilance and apprehension: seek and learn to recognize who and what, in the midst of the inferno, are not inferno, then make them endure, give them space.”]

Because in my book, both are paragons of imagination.